The District is a political subdivision of the State of Texas, created by order of the Fort Bend County Commissioners Court, adopted on July 2, 1984, and operates pursuant to Chapters 49 and 57 of the Texas Water Code. The District currently contains approximately 1,522 acres of land.

The District was created to construct and operate levee and drainage improvements to serve the land within the boundaries of the District.

As of August 1, 2017, 2,064 single-family residential lots on approximately 642 acres had been completed, 1,120 homes were completed (1,108 occupied), 181 homes were under construction or in a builder’s name and 763 vacant developed lots were available for home construction. A portion of the District (MUD 187) is being developed as Del Webb Sweetgrass, an active adult/retirement community with home ownership restricted to purchasers age 55 or older with additional restrictions on children living in the home. Del Webb is a trademark community of Pulte Homes. Portions of the District are being developed as Veranda (MUD 215) and Williams Ranch (Williams Ranch MUD), both single-family residential communities, and approximately 18 acres are being developed for commercial use where an HEB Grocery is under construction (MUD 207) with an expected opening in the first quarter of 2018. Approximately 605 additional developable acres within the District (located in MUD 207, MUD 215 and Williams Ranch MUD) have not been fully provided with water distribution, wastewater collection and storm drainage facilities and approximately 257 acres are not developable (earthen levee, rights-of-way, detention, open spaces, easements and utility sites) of which 43 acres are not located within any municipal utility district, but are located within the boundaries of the District. 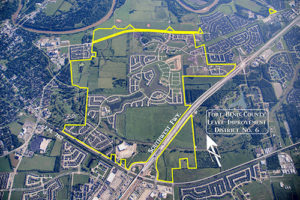 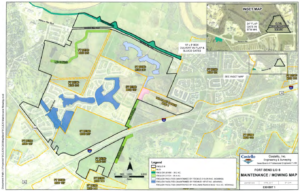 The Fort Bend County LID 6 Board generally meets on the fourth Monday of the month at the Veranda Cottage House, 23323 Pearl Glen, Richmond, Texas 77469.

For persons with questions or needing help regarding website accessibility, or to request the provided information in alternative formats, please call (713) 860-6400.